The lagoon system in Norway Maine was originally designed in 1964. The plant came on line in 1965 and consisted of two, 7 foot deep, lagoons of about 7 acres each. The primary lagoon was provided with a course bubble tubing aeration system run from a blower house. A contact chamber, gas chlorination, and a comminutor system were also installed. The inner lagoon embankments were paved with asphalt .

In 1987 the DEP performed a load allocation study on the Little Androscoggin River which resulted in a requirement to hold all discharge to the river from June 16th through September 1st of each year.

In 1990 the plant was upgraded to allow for seasonal discharge. The plant site did not allow for the construction of additional lagoons, so storage was created by building the lagoons vertically. As completed the lagoons are 20 feet deep and aeration is provided using surface aerators. The Primary lagoon is 300 feet wide and 1000 feet long, with 6 aeration units set up in a counter clockwise racetrack pattern. They are mounted to allow operation during changes of 10 feet in lagoon operating levels. This has resulted in a what might best be termed a single wall oxidation ditch with a velocity of .5 fps from the surface to the lagoon floor. The center of the lagoon is still and has an anaerobic zone on the bottom during significant periods of the year.

Sludge production which has been less than expected is located in this center part of the primary lagoon.

The secondary lagoon is provided with 2 aeration units positioned to affect the discharge end of the lagoon.

New chlorination and de-chlorination equipment along with new flow monitoring equipment was also installed during the upgrade construction.

An upgrade of the headworks was completed in 2000 and included a mechanical stepscreen, rampress, and new grit chamber aeration system. 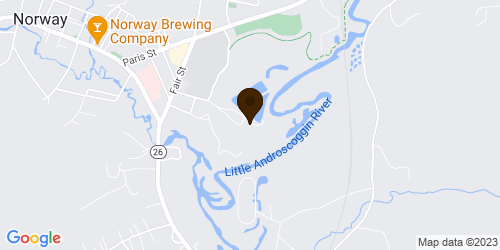